Toufik Benedictus "Benny" Hinn (born 3 December 1952) is an Israeli Christian televangelist, best known for his regular "Miracle Crusades"—revival meeting or faith healing summits that are usually held in stadiums in major cities, which are later broadcast worldwide on his television program, This Is Your Day.

Biography: Hinn was born in Jaffa, in 1952, in the then newly established state of Israel to parents born in Palestine with Greek-Egyptian, Palestinian and Armenian-Lebanese heritage. He was raised within the Eastern Orthodox tradition and baptized by the patriarch of Jerusalem.

Soon after the 1967 Arab–Israeli War ("The Six-Day War"), Hinn's family emigrated to Toronto, Ontario, Canada, in 1968 where he attended Georges Vanier Secondary School. He did not graduate. In his books, Hinn states that his father was the mayor of Jaffa at the time of his birth and that he was socially isolated as a child and had a stutter, but that he was nonetheless a first-class student

In 1972, he became a born-again Christian. Hinn has written that on 21 December 1973, he traveled by charter bus from Toronto to Pittsburgh to attend a "miracle service" conducted by evangelist Kathryn Kuhlman.[9] Although he never met her personally, he often attended her "healing services" and has often cited her as an influence in his life. In 1974 he was invited to speak about his spiritual experience at Trinity Pentecostal Church in Oshawa and claimed to have been cured of his stuttering.

Ministry: On moving to the United States, Hinn traveled to Orlando, Florida, where he founded the Orlando Christian Center in 1983. Eventually, he began claiming that God was using him as a conduit for healings, and began holding healing services in his church. These new "Miracle Crusades" were soon held at large stadiums and auditoriums across the United States and the world, the first nationally televised service being held in Flint, Michigan, in 1989. In 1990, he also launched a new daily talk show called This Is Your Day, which to this day airs clips of supposed miracles from Hinn's Miracle Crusades. The program premiered on the Trinity Broadcasting Network of Paul Crouch, who would become one of Hinn's most outspoken defenders and allies. Hinn's ministry began to rapidly grow from there, winning praise as well as criticism from fellow Christian leaders. In 1999, he stepped down as pastor of the Orlando Christian Center, moving his ministry's administrative headquarters to Grapevine, Texas, a suburb of Fort Worth, while hosting This Is Your Day from a television studio in Orange County, California, where he now lives with his family. His former church was renamed Faith World Church under the leadership of Clint Brown, who merged his Orlando church with Hinn's.

Benny Hinn is the author of a number of Christian books. His thirty-minute TV program This Is Your Day is among the world's most-watched Christian programs, seen on various Christian television networks, including Trinity Broadcasting Network, Daystar Television Network, Revelation TV, Grace TV, Vision TV, INSP Networks, and The God Channel.

Hinn conducts regular "Miracle Crusades"—revival meeting / faith healing events held in sports stadiums in major cities throughout the world. Tens of millions attend his Holy Spirit Miracle Crusades each year.[dubious – discuss] Hinn claims to have spoken to one billion people through his crusades, including memorable crusades with attendance of 7.3 million people (in three services) in India, the largest healing service in recorded history. Evander Holyfield, who was diagnosed with a non-compliant left ventricle, has credited his healing to Benny Hinn, stating that through God working through Hinn, he was healed as he had "a warm feeling" go through his chest as Hinn touched him.

Beliefs: Hinn's teachings are charismatic, accepting the validity of spiritual gifts, and Word of Faith in origin, with a focus on financial prosperity. Some doctrine and practices that Hinn teaches are rejected in mainstream Christianity.

Missions: Benny Hinn Ministries claims to support 60 mission organizations across the world and several orphanages around the world, and claims to house and feed over 100,000 children a year and support 45,000 children daily because of his donors.

Benny Hinn - Sermon: God's Power Displayed in Lagos, Nigeria. Lagos, Nigeria, is the largest city on the African continent and home to one of the most powerful churches in the world, Christ Embassy, pastored by Chris Oyakhilome. It was here that Pastor Benny Hinn ministered for two nights in…
Read more...

Defeating The Giant Of Debt In Your Life Part 3 - A special sermon from Benny Hinn. The Word of God specifically tells us, “Beloved, I wish above all things that thou mayest prosper and be in health, even as thy soul prospereth” (3 John 2). Your soul is your…
Read more... 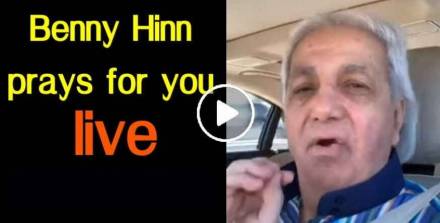 Pastor Benny Hinn prays for you live. I just want to minister to you and pray with you.
Read more...

Benny Hinn - Making Room For The Glory of God

Benny Hinn - A Sword Is Coming to America

Benny Hinn - The Three Realm of Prayer. We are promised, “Ask, and it shall be given you; seek, and ye shall find; knock, and it shall be opened unto you: For every one that asketh receiveth; and he that seeketh findeth, and to him that knocketh it shall be…
Read more...

My faith is high today and I really want to believe God with you! - Benny Hinn

Benny Hinn - My faith is high today and I really want to believe God with you!
Read more...

Benny Hinn - Sermon: Miracles Happen in God’s Presence! Join Pastor Benny Hinn today for a time of uplifting worship followed by faith-building testimonies of miraculous healings and a remarkable release of the Holy Spirit’s anointing. As you participate in this powerful broadcast you’ll be positioned to receive the miracle…
Read more...