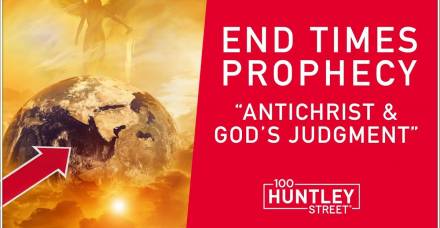 Are these the end times? Who is the Antichrist and False Prophet in the Book of Revelation? What is the Millennial Reign of Christ?
In this interview, Dr. David Jeremiah, the founder and host of Turning Point speaks with Dr. John Hull and explains what we can know about end times prophecy as revealed in the Bible, specifically The Book of Revelation.

If You See This Number, Run Fast & Read Revelation - Off The Kirb Ministries 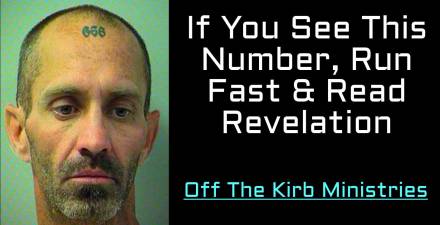 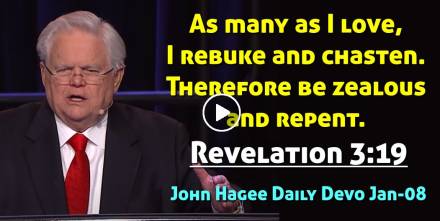 John Hagee (January-08-2022) Daily Devotional: Revelation 3:19 - As many as I love, I rebuke and chasten. Therefore be zealous and repent.

Three basic truths come to mind when we mention repentance.

First of all, everybody needs it! The Bible clearly tells us that if we say that we do not have any sin, we only fool ourselves; we contradict God Himself (1 John 1:8). We are sinners, and God commands all of us everywhere to repent (Acts 17:30).

Secondly, repentance is absolutely effective. Repentance is not a feeling; it is a fact. If we confess our sin, God is faithful to forgive us and make us clean (1 John 1:9). Many regret what they did, whom they hurt, and the consequences of sin, but true repentance involves confession to God and turning away from sin to follow His plan.

Thirdly, God assures us that He will rebuke and chasten every child He loves. He cares enough to correct us, to help us align our priorities with His. When He does convict and convince us, we must be eager and enthusiastic to repent. We discover why in Revelation 3:20.

He stands at the door of our heart and knocks. The longer we refuse to repent, the harder it is to hear His hand against the door. Repentance sweeps away the barrier of sin. We now hear His insistent knock and throw open the door to experience sweet fellowship with our Savior.

Blessing: May the Lord bless you and keep you. May the Lord make His face to shine upon you and be gracious unto you and give you His peace. Be zealous and repent! Open the door to Jesus and His healing and hope. Thank God for the mercy and grace that is yours through repentance! 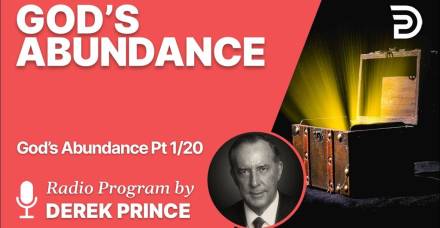 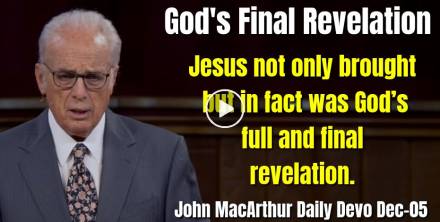 "God, after He spoke long ago to the fathers in the prophets in many portions and in many ways, in these last days has spoken to us in His Son" (Heb. 1:1-2).

Jesus not only brought but in fact was God’s full and final revelation.

A Samaritan woman declared, "I know that Messiah is coming (He who is called Christ); when that One comes, He will declare all things to us" (John 4:25). The expectation of that day, even among the Samaritans, was that Messiah would unfold the full and final revelation of God. The Holy Spirit, through the writer of Hebrews, affirms that to be true: "God . . . in these last days has spoken to us in His Son" (Heb. 1:1-2).

The Old Testament had given divine revelation in bits and pieces. Every piece was true, yet incomplete. But When Jesus came, the whole picture became clear, and though rejected by His own people, He was, in fact, the fulfillment of the messianic hope they had cherished for so many centuries.

The Old Testament age of promise ended when Jesus arrived. He is God's final word: "As many as may be the promises of God, in Him they are yes; wherefore also by Him is our Amen to the glory of God through us" (2 Cor. 1:20).

God fully expressed Himself in His Son. That's why John said, "The Word became flesh, and dwelt among us, and we beheld His glory, glory as of the only begotten from the Father, full of grace and truth. . . . No man has seen God at any time; the only begotten God, who is in the bosom of the Father, He has explained Him" (John 1:14, 18). Paul added that in Christ "all the fulness of Deity dwells in bodily form" (Col. 2:9).

The practical implications of that truth are staggering. Since Christ is the fullness of divine revelation, you need nothing more. In Him you have been made complete (Col. 2:10), and have been granted everything pertaining to life and godliness (2 Pet. 1:3). His Word is sufficient, needing no additions or amendments.

Suggestion for Prayer - Ask God to teach you how to rely more fully on your resources in Christ. 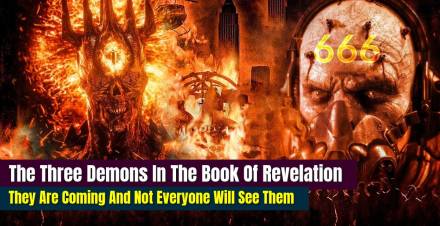 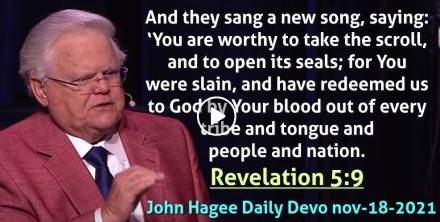 John Hagee (november-18-2021) Daily Devotional: Revelation 5:9 - And they sang a new song, saying: ‘You are worthy to take the scroll, and to open its seals; for You were slain, and have redeemed us to God by Your blood out of every tribe and tongue and people and nation.

Two by two, male and female, animals from every species boarded the ark – from the mammoth elephant to the tiniest snail.

Jesus, the Ark of our salvation, provided a way of rescue for people of every kind. Through His sacrifice on the Cross, He welcomes “whosoever will” to join the family of God.

The Good News does not take your nationality, skin color, or social class into consideration. No one is disqualified by the sins of the past or the predicaments of the present. If you have a heartbeat and are breathing, you are the right kind of person to receive salvation through Jesus Christ!

One day, we will gather around the throne of God. Men and women from the whole earth will sing a new song to the only One worthy of worship. The redeemed from every walk of life – bakers and bikers, pastors and prostitutes, teachers and truck drivers – will eat together at the Marriage Supper of the Lamb.

Animals of every shape, size, and temperament marched aboard Noah’s ark. God sent His Son for you. Here is your invitation; He is waving you aboard. You are the right kind of person for Him.

Blessing: May the Lord bless you and keep you. May the Lord make His face to shine upon you and be gracious unto you and give you His peace. Thank God for the joy of your salvation. All blessing, honor, glory, and power to the Lamb Who sits on the throne! 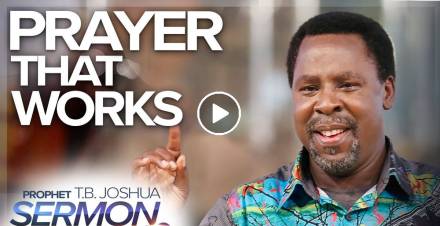 In a sermon straight from the heart, T.B. Joshua speaks on the fundamental principles of practical Christianity!

The few lines of this description cannot do justice to the incredible revelations found therein. Our only plea is that you take time to watch the ENTIRE message to grasp its full, remarkable meaning and the corresponding changes that will surely result in your life! The title is 'How Much You Need God'.

"I know how much I need God; that is why I pray all the time." - TB Joshua 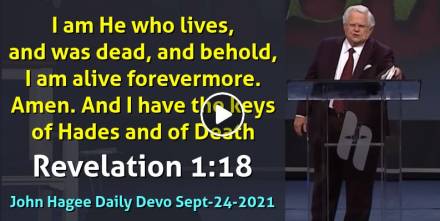 John Hagee (September-24-2021) Daily Devotional: Revelation 1:18 - I am He who lives, and was dead, and behold, I am alive forevermore. Amen. And I have the keys of Hades and of Death.

Jesus is alive! In the middle of busy, complicated days, we often need a reminder. He lives to redeem our lives from destruction, to declare the good news, to heal the brokenhearted, and to deliver the oppressed.

Two thousand years ago, His enemies crucified Him at Calvary. But three days later, He rose – victorious over death, hell, and the grave. Because of Him, we boldly proclaim, “O Death, where is your sting? O Hades, where is your victory?” (I Corinthians 15:55)

After His resurrection, He walked the earth for forty days showing Himself alive “by many infallible proofs” (Acts 1:3). Then, He ascended into heaven to sit in power at the right hand of God. All angels, powers, and authorities have been made subject to Him.

And there, He intercedes for us. He does not rest or sleep. He watches over us, filling us up with His power and His presence. Whenever two or more of us get together in His name, there He is right in the middle.

Take a moment to inhale the wonder of Him – as near as your breath. Close your eyes and see Him there at the Father’s elbow – continuing to plead your cause. All around us, He is at work. He lives!

Blessing:  May the Lord bless you and keep you. May the Lord make His face to shine upon you and be gracious unto you and give you His peace. Live in the wonder that Jesus Christ, the Lamb of God slain, the King of kings, has conquered death, hell, and the grave. He is alive forevermore!

Revelation 20: The Final Day - You URGENTLY Need To Know This - Motivation 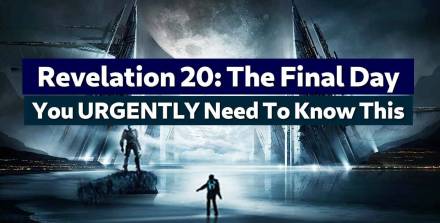 Watch Motivation - Revelation 20: The Final Day - You URGENTLY Need To Know This