A Faith-Filled Outlook - Charles Stanley Daily Devotion (February-20-2020). It's possible to endure hardship when we know God is working in us.

Genesis 39:21-23 ( 21 But the LORD was with Joseph and extended kindness to him, and gave him favor in the sight of the chief jailer. 22 The chief jailer committed to Joseph's charge all the prisoners who were in the jail; so that whatever was done there, he was responsible for it. 23 The chief jailer did not supervise anything under Joseph's charge because the LORD was with him; and whatever he did, the LORD made to prosper. ), Genesis 40:1-8 ( 1 Then it came about after these things, the cupbearer and the baker for the king of Egypt offended their lord, the king of Egypt. 2 Pharaoh was furious with his two officials, the chief cupbearer and the chief baker. 3 So he put them in confinement in the house of the captain of the bodyguard, in the jail, the same place where Joseph was imprisoned. 4 The captain of the bodyguard put Joseph in charge of them, and he took care of them; and they were in confinement for some time. 5 Then the cupbearer and the baker for the king of Egypt, who were confined in jail, both had a dream the same night, each man with his own dream and each dream with its own interpretation. 6 When Joseph came to them in the morning and observed them, behold, they were dejected. 7 He asked Pharaoh's officials who were with him in confinement in his master's house, Why are your faces so sad today?" 8 Then they said to him, We have had a dream and there is no one to interpret it." Then Joseph said to them, Do not interpretations belong to God? Tell it to me, please." )

If anyone had reason to be discouraged, Joseph did. He not only endured his mother’s death and his brothers’ hatred but also faced slavery and imprisonment because of false allegations. Yet he was not an angry person.

Joseph kept his faith-filled outlook because he consistently relied upon God. When two royal servants were jailed, he acted with compassion and gave them aid. And notice how Joseph didn’t shrink back from speaking boldly about God to these men and to Pharaoh. When the Egyptian leader sought an answer, Joseph told him it would come from the Lord (Gen. 41:16 Joseph then answered Pharaoh, saying, It is not in me; God will give Pharaoh a favorable answer.").

Joseph’s story reminds us that in hard places, we too can experience our Father’s presence and thrive. You might be “held captive”—by unemployment, ill health, or a difficult relationship—but you can be hopeful because it is God who works in us. And His Holy Spirit will produce godly fruit in us when we depend upon Him (Gal. 5:22-23  But the fruit of the Spirit is love, joy, peace, patience, kindness, goodness, faithfulness, 23 gentleness, self-control; against such things there is no law).

Joseph encountered much hardship in his life, but he saw that ultimately God always used it for good (Gen. 50:19-20  19 But Joseph said to them, Do not be afraid, for am I in God's place? 20 As for you, you meant evil against me, but God meant it for good in order to bring about this present result, to preserve many people alive). Thanks to the Holy Spirit, we can have a faith-filled perspective that enables us to glorify the Lord even in times of adversity. 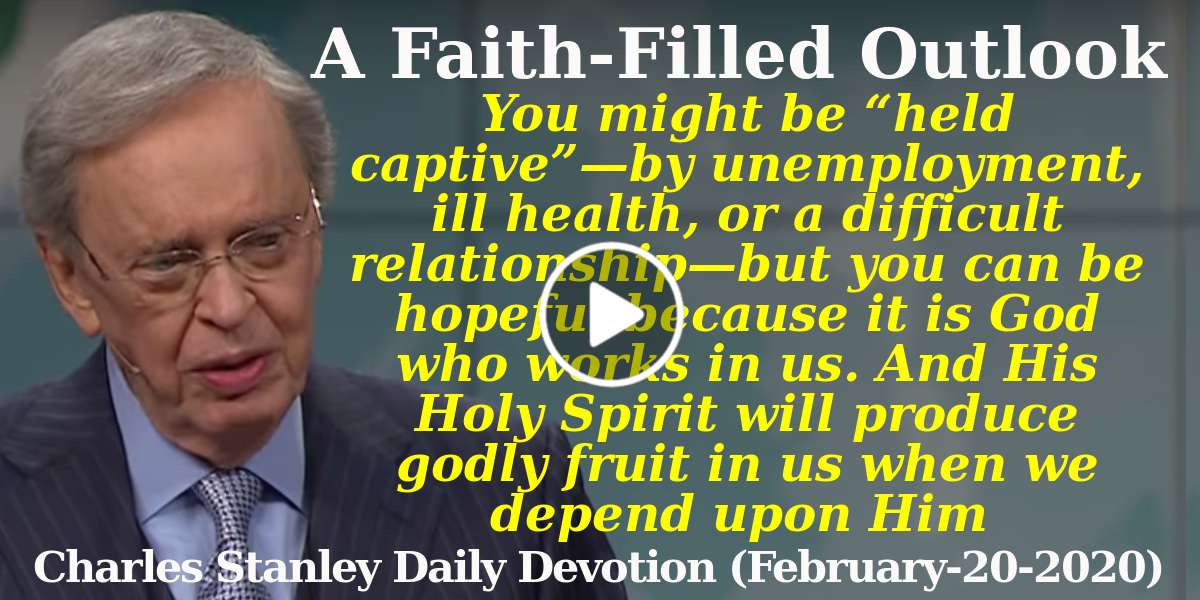