Sunday Reflection: The Promise of His Healing – Charles Stanley Daily Devotion (July-26-2020). Jesus wants to enter our lives, no matter how dirty or messy they are.

After completing His famous sermon (read Matthew 5-7), Jesus came down from the mountain, and a leper approached, asking to be made clean (Matt. 8:1-3 "1 When Jesus came down from the mountain, large crowds followed Him. 2 And a leper came to Him and bowed down before Him, and said, Lord, if You are willing, You can make me clean." 3 Jesus stretched out His hand and touched him, saying, I am willing; be cleansed." And immediately his leprosy was cleansed"). Under the laws of the time (see Leviticus 13), touching this man would have meant defilement—ceremonial uncleanness—which required ritual purification to regain one’s place in Jewish society.

Apparently physical contact wasn’t even necessary, as we read just a few verses later that Jesus healed a centurion’s servant with words alone (Matt. 8:5-13 "5 And when Jesus entered Capernaum, a centurion came to Him, imploring Him, 6 and saying, Lord, my servant is lying paralyzed at home, fearfully tormented." 7 Jesus said to him, I will come and heal him." 8 But the centurion said, Lord, I am not worthy for You to come under my roof, but just say the word, and my servant will be healed. 9 For I also am a man under authority, with soldiers under me; and I say to this one, `Go!' and he goes, and to another, `Come!' and he comes, and to my slave, `Do this!' and he does it. " 10 Now when Jesus heard this, He marveled and said to those who were following, Truly I say to you, I have not found such great faith with anyone in Israel. 11 I say to you that many will come from east and west, and recline at the table with Abraham, Isaac and Jacob in the kingdom of heaven; 12 but the sons of the kingdom will be cast out into the outer darkness; in that place there will be weeping and gnashing of teeth." 13 And Jesus said to the centurion, Go; it shall be done for you as you have believed." And the servant was healed that very moment"). Yet He chose to touch the leper anyway—not only to heal Him, but also to make him clean.

Consider this: Though we may not have the man’s disease, each of us approaches God as if we’re leprous, with a sick heart in need of healing. What a joy to know that His presence—His touch—cleanses, restores, and sets us free.

• Picture Jesus stretching out His hand toward you as He did in Matt. 8:3 (Jesus stretched out His hand and touched him, saying, I am willing; be cleansed." And immediately his leprosy was cleansed.). Is it easy to reach out and accept His offer of restoration? 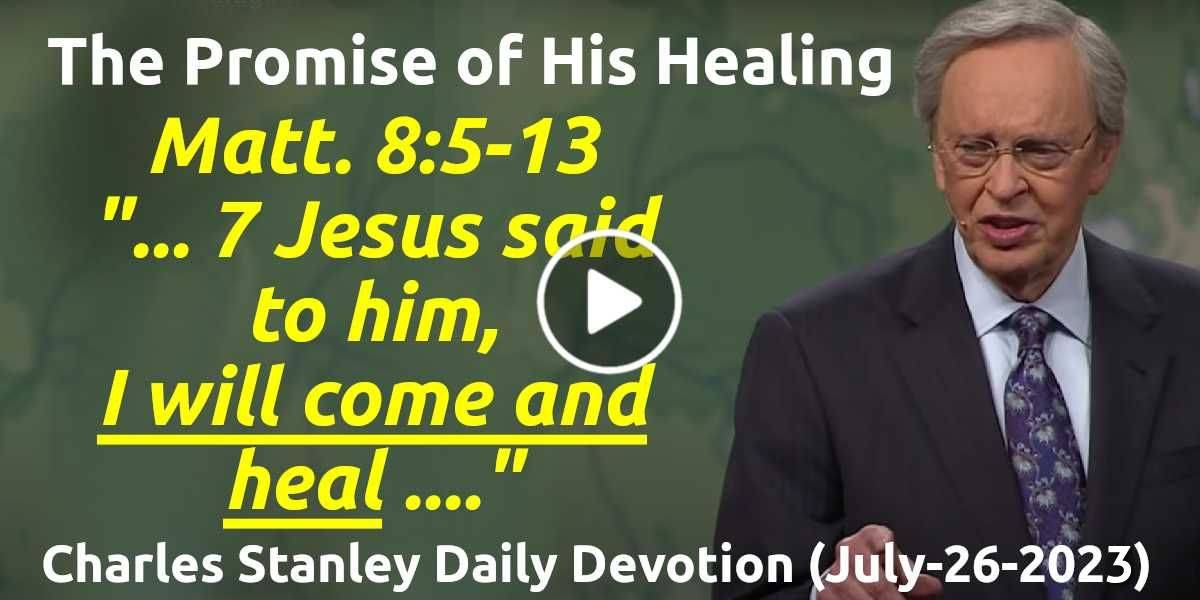