The God Who Rescues Us - Charles Stanley Daily Devotion (December-19-2019). Jesus rescued us from the penalty that awaited because of our sins. Romans 3:10-28 " as it is written, THERE IS NONE RIGHTEOUS, NOT EVEN ONE; THERE IS NONE WHO UNDERSTANDS, THERE IS NONE WHO SEEKS FOR GOD; ALL HAVE TURNED ASIDE, TOGETHER THEY HAVE BECOME USELESS; THERE IS NONE WHO DOES GOOD, THERE IS NOT EVEN ONE." THEIR THROAT IS AN OPEN GRAVE, WITH THEIR TONGUES THEY KEEP DECEIVING," THE POISON OF ASPS IS UNDER THEIR LIPS"; WHOSE MOUTH IS FULL OF CURSING AND BITTERNESS"; THEIR FEET ARE SWIFT TO SHED BLOOD, DESTRUCTION AND MISERY ARE IN THEIR PATHS, AND THE PATH OF PEACE THEY HAVE NOT KNOWN." THERE IS NO FEAR OF GOD BEFORE THEIR EYES." Now we know that whatever the Law says, it speaks to those who are under the Law, so that every mouth may be closed and all the world may become accountable to God; because by the works of the Law no flesh will be justified in His sight; for through the Law comes the knowledge of sin. But now apart from the Law the righteousness of God has been manifested, being witnessed by the Law and the Prophets, even the righteousness of God through faith in Jesus Christ for all those who believe; for there is no distinction; for all have sinned and fall short of the glory of God, being justified as a gift by His grace through the redemption which is in Christ Jesus; whom God displayed publicly as a propitiation in His blood through faith. This was to demonstrate His righteousness, because in the forbearance of God He passed over the sins previously committed; for the demonstration, I say, of His righteousness at the present time, so that He would be just and the justifier of the one who has faith in Jesus. Where then is boasting? It is excluded. By what kind of law? Of works? No, but by a law of faith. For we maintain that a man is justified by faith apart from works of the Law.

When we tell people that God wants to save them, they may immediately wonder why rescue is necessary. In their mind, they are in no immediate danger and therefore have no need of a Savior. Before a person can appreciate the good news, he or she has to understand the bad news.

In order to rescue fallen humanity, God ordained a plan for mankind’s salvation before He even created the world. Since His attribute of justice could not be set aside, an acceptable substitute was chosen to bear the condemnation and punishment that sinners deserved. The only one qualified for this mission was His beloved Son, who took on human flesh and lived a life without sin.

The gift of forgiveness and reconciliation to God is free to all who will receive Jesus Christ and believe He made atonement on their behalf. There is no condemnation for those who take refuge in Him. But those who reject His offer of salvation will have to bear the penalty for their sins themselves.

Christ did everything that was necessary to rescue us. All we have to do is believe and entrust our life to Him by faith. 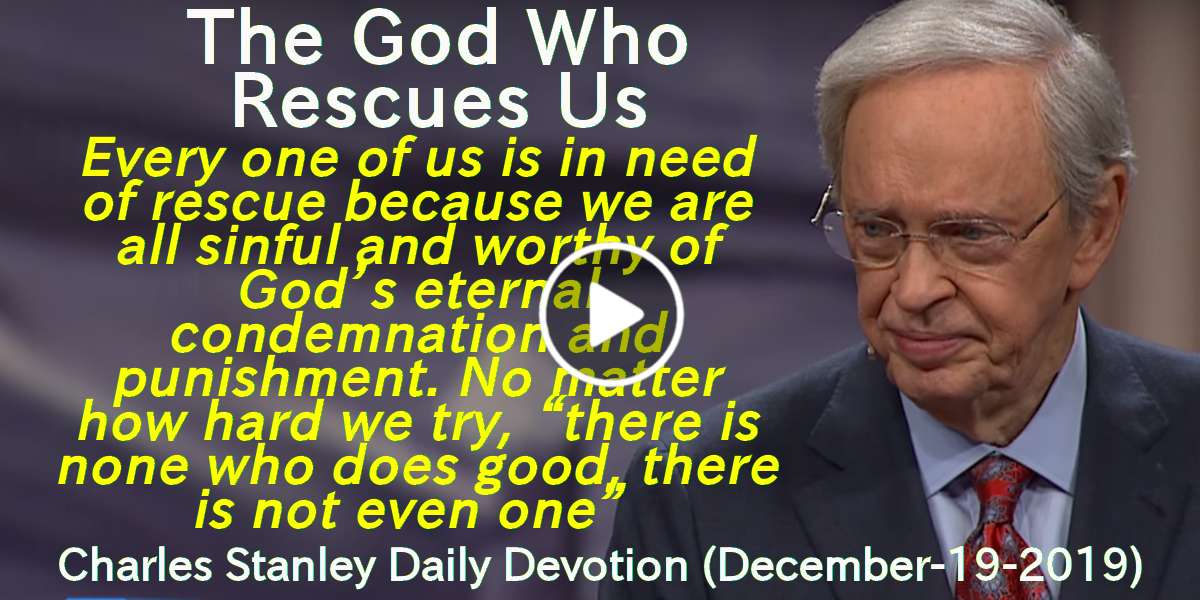