Will There Be Eternal Punishment? - Charles Stanley Daily Devotional (March-21-2020) 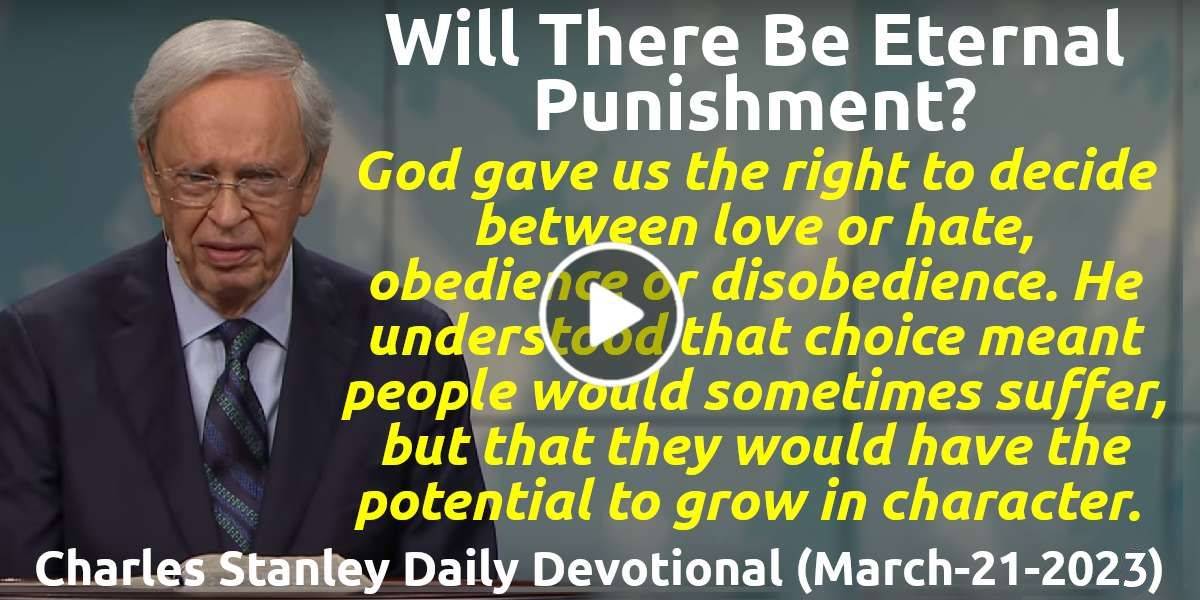 Will There Be Eternal Punishment? - Charles Stanley Daily Devotional (March-21-2020). God created us with free will, and we have the opportunity to choose eternity with Him.

Revelation 20:11-15 ( 11 Then I saw a great white throne and Him who sat upon it, from whose presence earth and heaven fled away, and no place was found for them. 12 And I saw the dead, the great and the small, standing before the throne, and books were opened; and another book was opened, which is the book of life; and the dead were judged from the things which were written in the books, according to their deeds. 13 And the sea gave up the dead which were in it, and death and Hades gave up the dead which were in them; and they were judged, every one of them according to their deeds. 14 Then death and Hades were thrown into the lake of fire. This is the second death, the lake of fire. 15 And if anyone's name was not found written in the book of life, he was thrown into the lake of fire).

Many people don’t like the idea of eternal punishment for the ungodly. Some people think God shouldn’t have created the world at all if He knew we were going to sin. But can you imagine never having been born? Others think that the heavenly Father shouldn’t have created man with the ability to sin and to do evil. But would you want to be a robot with no choices and no free will?

Our Father decided upon a different alternative: He created human beings with a free will. In this way, man can receive love from the Creator and choose to glorify Him in return. God gave us the right to decide between love or hate, obedience or disobedience. He understood that choice meant people would sometimes suffer, but that they would have the potential to grow in character. Then God can shape us as we grow in love and submit to Him—and in the process, we will be conformed to His likeness.

God knew free will was the best option for His created beings. What will you do with yours? I pray that you’ll understand the sacrifice Jesus made for you on the cross and choose to receive His love today.