According to Scripture, we are never to think of God as a cold, unfeeling Father. Our God feels deeply! He is touchable. His heart can be moved upon. In fact, He is touched with the feelings of our infirmities (see Hebrews 4:15).

God not only feels pain, but grieves as well. You remember that Jesus wept at Lazarus' tomb. Here is a picture of God in flesh weeping! It shows us that the Lord feels with us and weeps with us. After all, Jesus said, "...he that hath seen me hath seen the Father..." (John 14:9).

We catch another clear glimpse of God's pain in the Garden of Gethsemane. Just hours before the guards came to deliver Jesus to the high priest, He wept so profusely and so feelingly that blood was mixed with His tears. God was in pain over the sins of humankind!

Have you ever wondered why Jesus wept in the garden - why He had such pain in His heart? It wasn't because of the pain He would face on the Cross. No, Jesus wasn't longing to reject the cup.

Rather, I believe Jesus was looking down all the years of humankind to the Second Coming. And as He looked through those years, He saw the unthinkable. He saw multitudes of people rejecting His free offer of full, complete salvation. And He saw the pain and suffering they faced as a result of their rejecting Him.

Jesus didn't wail, "I'm about to shed My blood and go through such pain - but you're going to reject Me. I'll get even with you on the Judgment Day. You'll have a payday coming!"

No! Jesus was weeping over the multiplied millions yet to come - those who would know of His free offer of salvation, favor, blessing, unction, anointing - and yet would not avail themselves of any of it. Christ was weeping that so many were going to be lost, despite having a remedy so available to them.

This is the pain of God! It's the pain that humankind brings upon itself. Jesus didn't just carry our sins to the Cross. He also carried the pain of the whole world!

Here in New York City, we meet people everywhere who are nervous, depressed. We meet drug addicts, alcoholics and homeless people who sit outside the doors of our church. All these people have the gospel freely preached to them - and yet many reject it!

In the garden, Jesus was picturing in His God-eyes the great masses of humanity and all their pain. And in that moment, it all was heaped upon Him - your pain, my pain, the pain of every person who rejects Him at any time.

Yet I also believe Jesus had sorrow of heart for another reason. He knew that people were going to mock Him, ridicule Him, make Him the song of drunkards. And He was pained because of the justice that would have to be meted out to all who denied His sacrifice!

When Christ said to His disciples, "...could ye not watch with me one hour?" (Matthew 26:40), I believe it was out of pain. He wasn't rebuking them. Rather, He was pained because He knew their flesh was weak. And He knew what their weakness would bring down upon them.

In the very next verse, Jesus says, "...the spirit indeed is willing, but the flesh is weak" (verse 41). In His all-knowing eyes, Jesus foresaw the disciples forsaking Him and fleeing. He foresaw their emptiness and pain after rejecting Him, and their return to their former lives as fishermen. 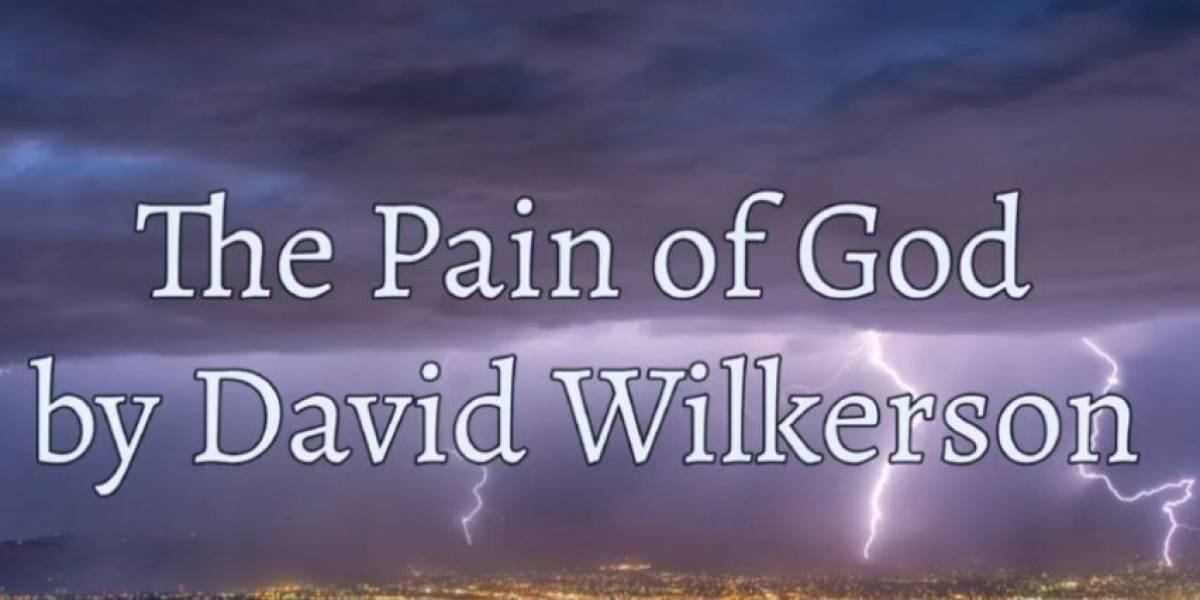 David Wilkerson was the Founding Pastor of Times Square Church in New York City. He was called to New York in 1958 to minister to gang members and drug addicts, as told in the best-selling book,The Cross and the Switchblade.

In 1987, David Wilkerson returned to "the crossroads of the world" to establish Times Square Church. As a pastor of the church, he faithfully led this congregation, delivering powerful biblical messages that encour ...