The goodness of God leads you to repentance. - Romans 2:4

Famished and fatigued from working all night at sea and catching nothing, Peter and his crew of fishermen carried their fishing nets to shore as the golden sun rose over the Galilean horizon. As they began washing their nets, large numbers of people began to throng the waterfront. Then Peter saw the man everyone was crowding to see.

Before Peter knew it, this man headed in his direction and got into his boat! He then gestured to Peter, and Peter and his crew instinctively grabbed their nets and went back into the boat. The man smiled warmly at Peter and asked if Peter could push the boat out some distance from the shore.

By this time, the waterfront was blanketed with people eager to hear this man speak. Peter turned to his seasoned crew and instructed them to push the boat out. The crew responded swiftly to their captain and watched as the man sat down by the edge of the boat and began teaching the multitudes gathered on the shore.

When he was done speaking, he turned to Peter and requested that Peter and his men launch out into the deep and let down their nets for a catch. The request stung Peter’s heart and he explained to the man that they had been fishing all night and had caught nothing. Nevertheless, he was willing to comply with the man’s request.

Peter found himself wondering, What would a carpenter from Nazareth know about fishing? Peter had been fishing in these waters since he was a youth and knew the most opportune time to fish—definitely not this late in the morning!

As the boat reached the deep waters, Peter just went through the motions and cast one net into the water. One net, he thought, was enough to prove his point that there simply weren’t any fish to be caught!

Had it been anyone else—anyone but this man who carried himself with quiet authority and a warm friendliness—he would have scoffed at the request. But this man . . . something in his voice and carriage just made Peter acquiesce to his request more readily than his head knew why and despite every instinct telling him nothing was going to happen.

What happened next stunned Peter.

It was as if the net suddenly became a fish magnet! Massive schools of large tilapia rushed into the net from every direction, straining its capacity until it began to tear as Peter and his men began to haul up this unprecedented load of fish.

The amazed and frantic fishermen quickly hollered to their friends in another boat to come and help them. Now two boats were lined up side by side, with both crews hauling fish into their boats. The men worked furiously, loading onto the boats the thrashing fish with their silver scales glistening in the sun . . . until both boats were so full of fish that they began to sink!

Blown away by what he was witnessing, Simon Peter knelt before Jesus and proclaimed, “Depart from me, for I am a sinful man, O Lord!” (Luke 5:8).

Let me ask you this question: which came first—Peter’s repentance or God’s blessing? Under the new covenant of grace, God blesses you first, and His blessings, favor, and overflowing love lead you to repentance!

Peter and his crew of mariners had toiled painstakingly all night and caught nothing. Then, when Jesus stepped for the first time into his boat, Peter’s business suddenly experienced a surge beyond his wildest imagination.

Today, the same thing can happen to you in your career, family, or health, as you open your heart to receive the Lord’s goodness and love. 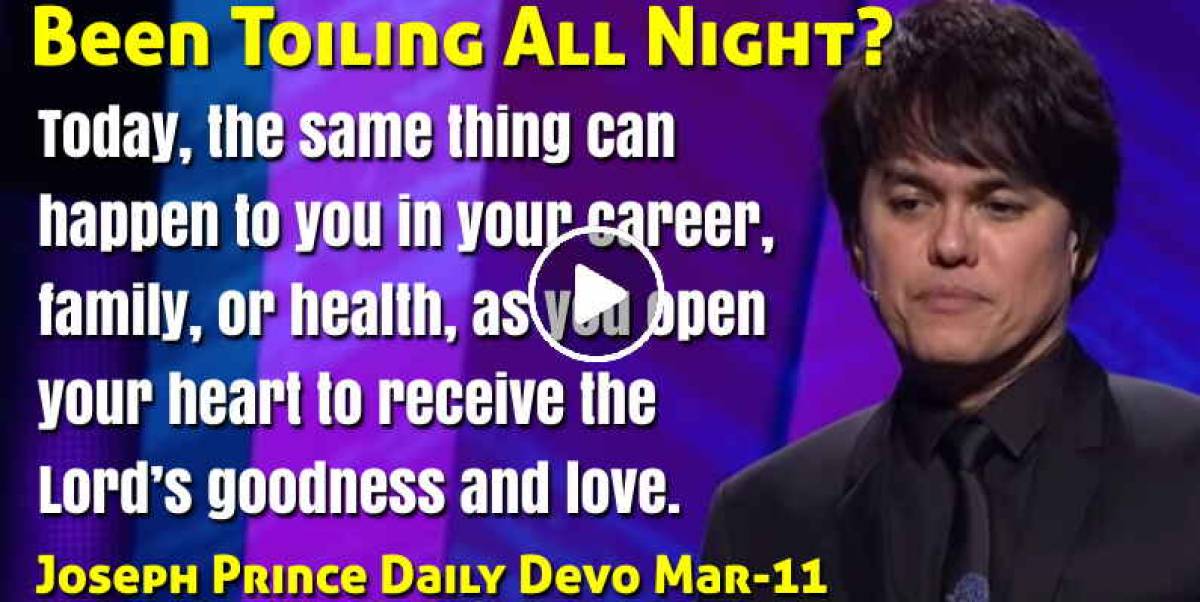