“I will set up shepherds over them who will feed them; and they shall fear no more, nor be dismayed, nor shall they be lacking,” says the LORD. - Jeremiah 23:4

It has been many years since I had the dream in which I heard the Lord saying to me, “The grace revolution is here.” That was back in 2001.

I still remember thinking, “Yes, Lord, I know it is coming.” Then He said, “No, it is here.” And He added, “I will set up shepherds over My flock and they will feed them. And My flock will fear no more, nor be discouraged, nor be lacking,” quoting from Jeremiah 23:4.

Then He gave me an impartation in my spirit and unveiled to me that the message that was to be preached—the now word for the grace revolution—was also found in Jeremiah 23.

In the grace revolution, God Himself is setting up shepherds who will preach the gospel of grace with authority and impart to the hearers security, certainty, assurance, and confidence so they will no longer be oppressed by fear or discouragement!

If you have lost many years living in doubt, fear, and depression, God is restoring those lost years to you in the grace revolution. I can’t wait to show you how the Lord is going to bring about restoration in every area of your life.

When the Lord restores, what He gives is always greater in quantity or quality than what was lost. Whatever the enemy has stolen from you, we are going to believe the Lord for a 120 percent restoration.

Why 120 percent? Because it is based on the principle of restitution in the trespass offering found in Leviticus 5 and 6. Leviticus 6:4–5 says:

Here we see God detailing what a person must do to provide restitution (or restoration) to someone he has injured. Notice this law states that he “shall restore its full value, add one-fifth more to it, and give it to whomever it belongs.” The full value of whatever was lost, defrauded, or stolen plus one- fifth, is 120 percent of the original value.

Now, this principle of restoration was under the law of Moses. How much more, then, can we expect restoration under the new covenant of grace—“a far better covenant with God, based on better promises” (Heb. 8:6 NLT). This is why we are going to trust God for a 120 percent—and more—restoration!

Notice, also, that the person brings his restitution on the day of his trespass offering. The trespass offering is a picture of what Jesus did for us at the cross. He became our substitute and was judged in our place for every trespass we committed so that we can freely receive every blessing of God, including the blessing of restoration.

My dear friend, if you have accepted Christ as your trespass offering, God’s much-more restoration is coming your way. If the enemy has stolen from you or defrauded you of the best years of your life, then in that very area in which you have suffered loss, God is going to give you much more than you had before.

He is going to restore to you the years the locusts have eaten (Joel 2:25), and in greater measure than you can imagine. Your best days are ahead of you! 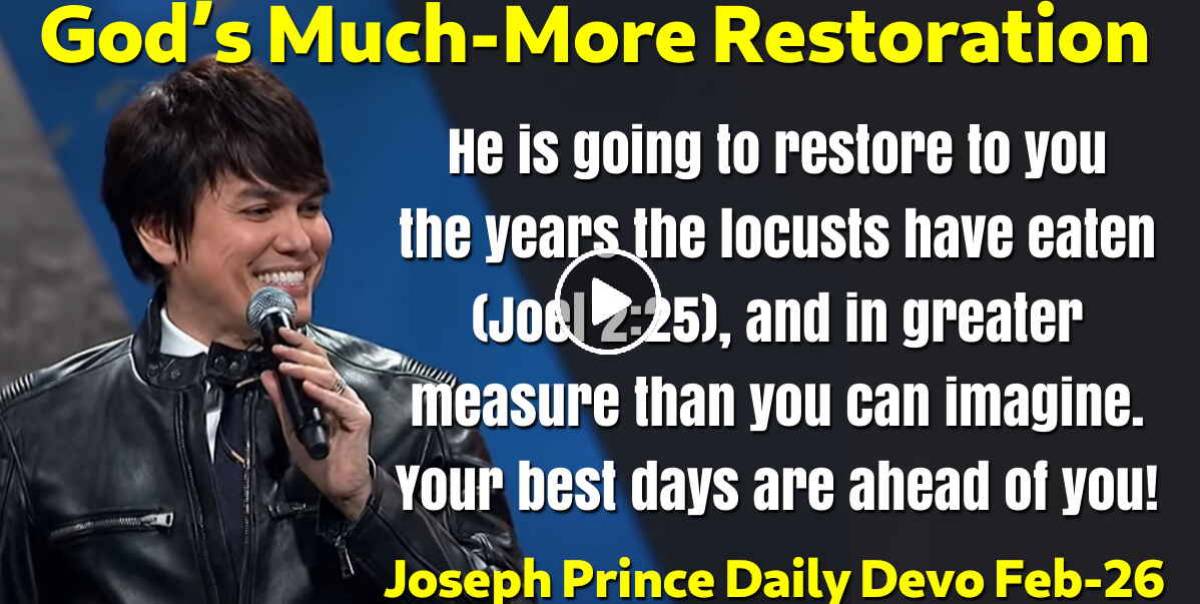