And He is before all things, and in Him all things consist. And He is the head of the body, the church, who is the beginning, the firstborn from the dead, that in all things He may have the preeminence. Colossians 1:17–18

Have you ever wondered why God called David “a man after My own heart” (Acts 13:22)? What made him so special, and how can we also be a man or woman after God’s heart?

I believe David was special because he got hold of something that was of the greatest importance to God’s heart. He got hold of a divine thought and objective in God’s heart and made a vow to God in the wilderness to bring back the ark of the covenant to its rightful place among God’s people in Jerusalem (Ps. 132:1–5). Because David placed such importance on bringing back the ark, God considered him a man after His own heart.

For more than twenty years, King Saul had left the ark in a hilly place called Kirjath Jearim (1 Sam. 7:2). So David made it his passion to bring the ark to Mount Zion in Jerusalem, for the Lord had chosen Zion (which represents God’s grace, as opposed to Mount Sinai, which represents His law) as His dwelling place. God Himself said of Zion, “This is My resting place forever; here I will dwell, for I have desired it” (Ps. 132:14).

This was the secret to David’s blessings. He pursued the ark of the covenant and God called him a man after His own heart. Today, you too can be a man or woman after God’s own heart. You can pursue Jesus and bring Him back into the center of your life. Make Jesus the centerpiece of every aspect of your life.

When Gillian from New Jersey and her husband started doing this, not only did it make their relationship stronger, but one blessing after another came into their lives. Round about the time they were introduced to the gospel of grace through my television broadcast, Gillian and her husband were struggling to conceive after being childless for all eleven years of their married life. They had tried all means, including in vitro fertilization, and Gillian was finally told that between her system being “so messed up” and her husband being diagnosed with a low sperm count, diabetes, and other diseases, they could never have a child on their own.

“But we watched you every morning,” Gillian told me, “and as we listened, we got a better and better understanding of God’s grace. Your sermons always teach us to put Jesus in the center of our lives, and so we started doing that. We began to believe that Jesus has paid the full price for us to have whatever we need through Him. We would see Him and His finished work in our relationship with each other and in our challenges.”

Well, as Gillian gave the Lord center place by giving heed to the hearing of His Word, she heard me speak in one of my sermons of an anointing to have children. She shared, “Instantly, I believed it and received it into my spirit. Pastor Prince, I am now six weeks pregnant. What medical science could not do, our beautiful Savior did! Praise the Lord! Not only that, but God has also been increasing my business to the extent that I need new equipment now, and I have no doubt He will supply it all. We know we are truly God’s beloved.”

What an awesome testimony! My friend, like Gillian and her husband, make Jesus, His finished work, and His grace, the center of everything in your life. Make Him the center of your marriage, family, career, and finances, and allow the fullness of His blessings to flow in your life today! 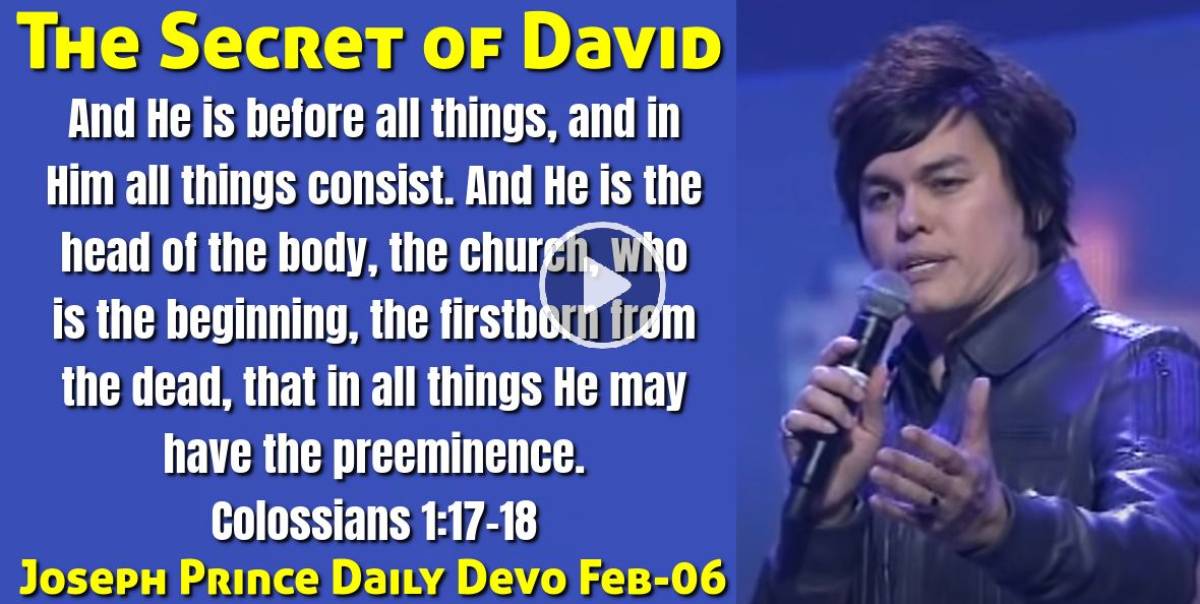