Let’s focus for a moment on this part of a well-known New Testament story. The disciples were in the middle of the Sea of Galilee at night when they looked up and saw Jesus walking on the water. That is amazing, but as the story continues, Matthew wrote of the boisterous winds, yet Jesus kept walking on top of the waves.

The disciples were afraid—and that makes sense. Who would expect to see anyone walking on top of the water, even under the best of conditions?

Then Jesus cried out and told them, “Take courage! It is I! Do not be afraid!”(Matthew 14:27 AMP). This is the powerful moment in the story. What will happen now? Do they move over and give Jesus a place to sit in their boat? Should they get out and join Him on the waves? Do they huddle in fear, reminding themselves that human beings can’t walk on top of water?

Peter was the only one who responded in true faith. And let’s make no mistake here. For Peter to say, “Lord, if it is [really] You, command me to come to You on the water”(Matthew 14:28 AMP) was a tremendous act of faith. You’ll notice that he was the only one who spoke that way.

That was a powerful moment of faith. It was a defining moment that pointed out Peter’s great faith and belief in Jesus, the Anointed One of God. He was so convinced that Jesus truly was the Son of God that he was ready to get out of the boat and walk on top of the water with Him.

How many of you would get out of the boat? I emphasize this because it would be easy enough to say, “Lord, I see You walking on the water, and I believe I could walk on the water alongside You.” But would you? Do you have the kind of faith that would enable you to step out of the boat? Of the 12 disciples, Peter was the only one who took that step of faith.

I’m not citing this example of faith to discourage you or to make you feel that your faith is somehow lacking. I’m simply pointing out the great triumph of a man who dared to believe! Peter believed so strongly that he took a step of faith over the side of the boat and started walking toward Jesus.

Most of us know the rest of the story. Some might even smirk, saying, “Big deal! He got out of the boat, started walking on the water, got scared, and began to sink. And he also received a rebuke from Jesus: ‘O you of little faith, why did you doubt?’” (Matthew 14:31 AMP).

But think about it—Jesus didn’t say those words to the other disciples. He directed the words “you of little faith” to Peter. The implication is the others had no faith at that moment.

Think of these words not just as words of rebuke, but also as words of encouragement to Peter, the one who had enough faith to step out of the boat and begin walking on the water.

What if you saw this as Jesus’ great encouragement, not just to Peter, but also to you? What if you looked at this event as Jesus saying to you, “You started so well. You believed Me, and got out of the boat. You did it! You walked on water just as I did. But then you allowed doubt to enter, and when that happened, you began to sink.”

This powerful story is a wonderful reminder that Jesus is always with you, and He will suspend natural laws to reach out to you and care for you.

Prayer Starter: Lord Jesus, please forgive my lack of faith. Increase my faith in Your Word, and help me to trust You enough to follow Your leading. When the circumstances around me threaten to pull me into deep waters of doubt, help me to focus on You. I ask these things in Your holy name. Amen. 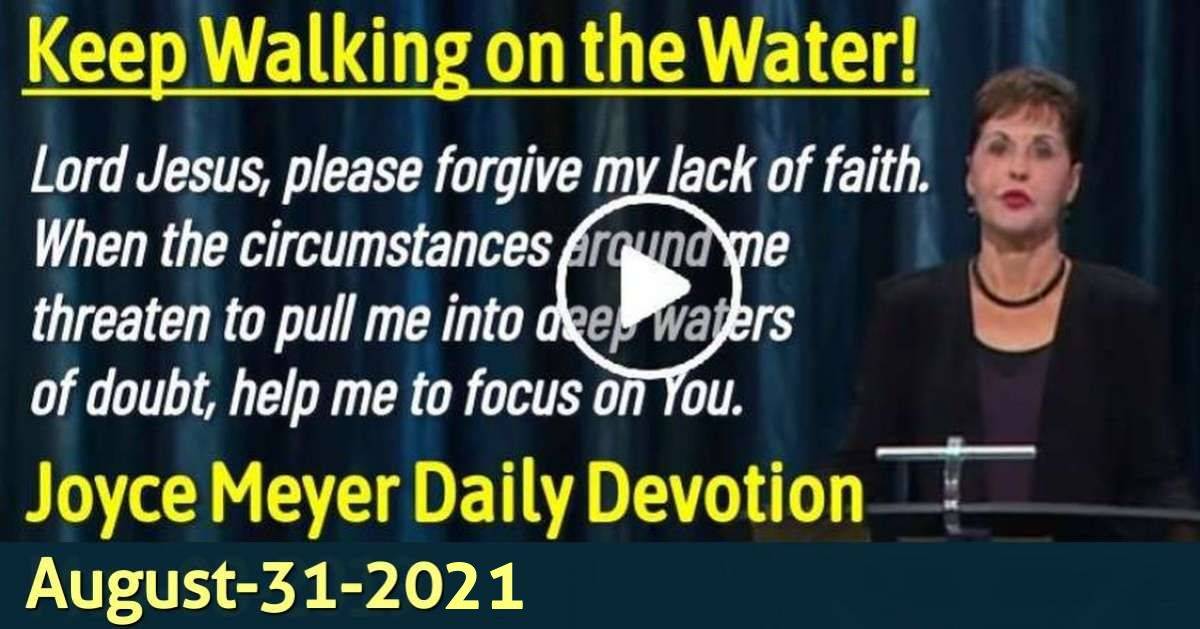