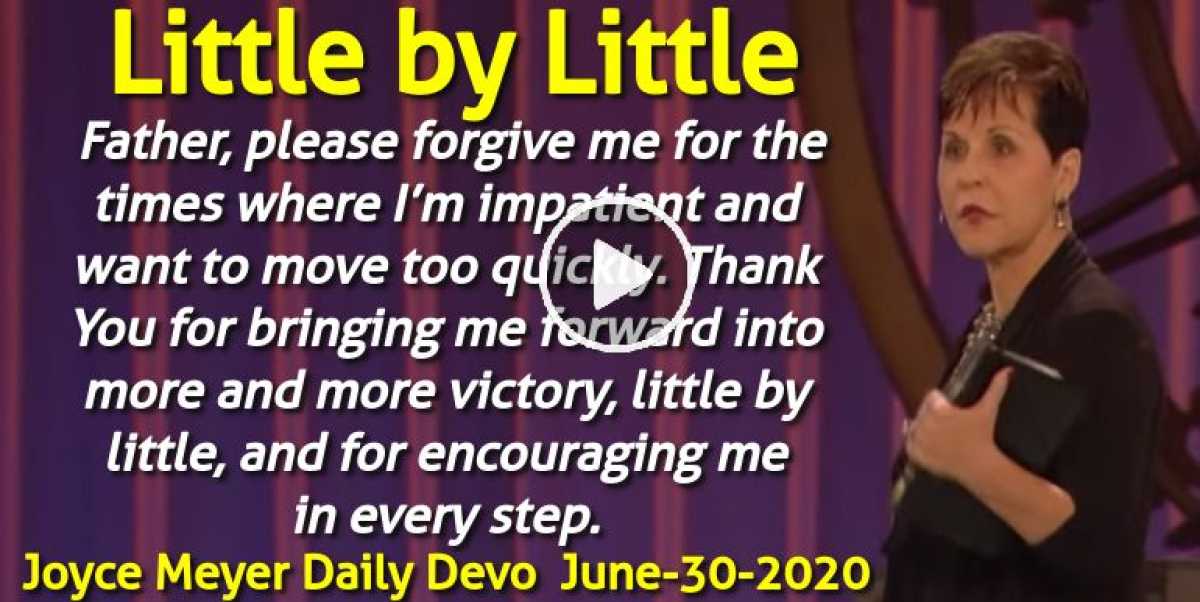 Recently I thought about my life from the time I seriously began to follow Jesus Christ up to right now. Had I known then—at the beginning of the journey—all the things God would take me through, I would’ve probably been afraid to sign up for the trip!

As I look back, however, I realize that God held my hand and let me move forward in small steps. I had times where I was deeply ¬discouraged, as we all do. I remember lots of bitter tears over my personal failures. But no matter what, God kept nudging me forward.

That’s the secret of living the victorious Christian life—we move ahead little by little. It’s an inching forward over months and years, and the same is true of the battle in our minds. We don’t oust Satan in one big blow and then live in victory forever after. We win one small battle, and then we’re ready to move on to the next one. We may have a few major victories that come suddenly, but not many of them. The fight to destroy Satan’s strongholds comes mostly by daily, doggedly, moving ahead.

The first time I realized that, it was discouraging, until I realized the wisdom of God. After the Jews left Egypt and wandered in the wilderness, God spoke to them before they went into the Promised Land. It was a special land—fertile, beautiful, and promised to them. But in the more than 400 years since Jacob and his sons had left the land, others had moved in and occupied land that didn’t belong to them.

For the children of Israel, it wasn’t just a matter of going in and settling down. They had to fight to take back every foot of ground—even though it was their inheritance.

That’s also how our spiritual walk works. God has the blessings out there waiting for us, but it’s up to us to go in and take the land. Just as it was for the Israelites, it’s a battle for us, too.

In today’s verse, God mentions the beasts of the field. There were many wild animals in the land, and it could have been dangerous for the people of Israel. Let’s think about what that might look like today…what if we thought of the beasts as pride? What if God suddenly gave us full, complete victory, and we never struggled again; how would that affect us? Surely pride would creep in, and we’d start to look down on others who haven’t been as victorious as we have been. We might not express our contempt in words, but those we were looking down on would still realize that we thought we were better than them. Not only does pride like this break God’s heart, but it also destroys our relationships and keeps us from moving forward.

God has a wonderful plan for each of us, but it never comes with just one major victory that causes us to never struggle again. Instead, it’s an ongoing warfare, so we need to stay vigilant and aware of the attacks of the enemy.

Another benefit of moving ahead little by little is that we savor every victory. Each time we overcome or destroy one of Satan’s strongholds, we rejoice, so we can remain in a constant state of thankfulness. If we’ve had only one victory—and that was thirty years ago—how dull would our lives be? Or worse yet, how easy it would be for us to take God for granted? Isn’t it better to serve a God who takes us slowly forward, always showing us the way, always encouraging us? We always have new horizons to reach for, and that makes our journey with Him exciting!

Prayer Starter: Father, please forgive me for the times where I’m impatient and want to move too quickly. Thank You for bringing me forward into more and more victory, little by little, and for encouraging me in every step. In Jesus’ Name, amen.