By the time Jehoshaphat became the king, Judah was a small nation, and the surrounding nations could easily defeat them. We learn that the king brought in many reforms. The Bible records that and then says, After this, the Moabites, the Ammonites, and with them the Meunites came against Jehoshaphat to battle (20:1 AMPC).

The most “sensible” thing would have been for the king to surrender and to forge some kind of treaty. There was no human way that such a small nation could defeat such large armies. In that context, we read that the king was afraid—and why wouldn’t he be? But he didn’t stop with fear.

I want to make this point clear. To feel fear isn’t sin or failure or disobedience. In fact, we do well to think of fear as a warning to us. It’s a shout of danger.

But then we must decide what to do with the fear. We can act; we can cringe; we can ignore it. King Jehoshaphat did the right thing: He set himself [determinedly, as his vital need] to seek the Lord (v. 3). He didn’t have answers, and he certainly wasn’t stupid enough to think that his tiny army could defeat his enemies. And that’s an important lesson for us to learn in our battles against Satan. Our enemy is powerful, and if we think we can defeat him by ourselves, we’re foolish and badly mistaken.

The king not only prayed, but he also proclaimed a fast throughout the entire land. The Bible goes on to say that he stood in the midst of the people and prayed for deliverance: For we have no might to stand against this great company that is coming against us. We do not know what to do, but our eyes are upon You (v. 12).

That is exactly the prayer God wanted to hear. The people admitted they didn’t know what to do, that they couldn’t win, and that their only hope was in God’s deliverance.

Just then, the Holy Spirit came upon a man named Jahaziel. “He said, hearken, all Judah, you inhabitants of Jerusalem, and you King Jehoshaphat. The Lord says this to you: Be not afraid or dismayed at this great multitude; for the battle is not yours, but God’s (v. 15). He went on to say, You shall not need to fight in this battle; take your positions, stand still, and see the deliverance of the Lord [Who is] with you.... Fear not nor be dismayed (v. 17). The account goes on to say that the people began to sing praises to God. When they did that, God had warriors from Mount Seir sneak in and kill Judah’s enemies so that none escaped.

That’s the biggest secret of winning the battles against your enemy. You acknowledge your fear—you can even call it “holy fear” because it pushes you to seek God. If you’re not really afraid (or worried) and don’t see the problem as bigger than yourself, why would you call for God’s help? But when it becomes overwhelming, you realize that you need divine help. Isaiah says it this way: When the enemy shall come in like a flood, the Spirit of the Lord will lift up a standard against him and put him to flight [for He will come like a rushing stream which the breath of the Lord drives] (Isaiah 59:19b AMPC).

When you cry out in holy fear, God hears and races to your rescue. That’s His promise, and He never breaks His promises to His own.

Prayer Starter: God, I’ve known fear, and too often I’ve concentrated on the fear and forgotten that it’s an opportunity to call on You so I can see Your hand of deliverance in my life. Give me holy fear so that I’ll always call on You in my times of trouble. In the name of Jesus Christ, I ask this, amen. 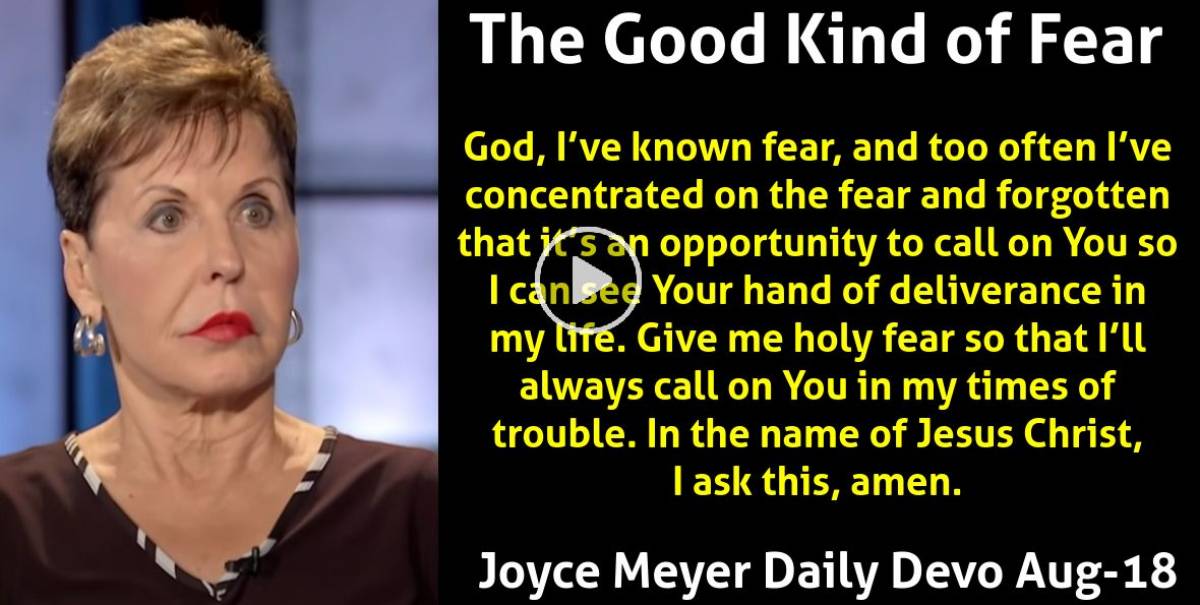