Benny Hinn - Sermon: Miracles Happen in God’s Presence! Join Pastor Benny Hinn today for a time of uplifting worship followed by faith-building testimonies of miraculous healings and a remarkable release of the Holy Spirit’s anointing. As you participate in this powerful broadcast you’ll be positioned to receive the miracle you need most when Pastor Benny prays in faith for you during this program. No matter what change you’re believing for, whether it is physical, spiritual, emotional, financial or in your family, remember that worship ushers us into the Presence of God, and that is where Miracles happen!

Michael Todd Ministries, Transformation Church - John & Johnisha's Story.  This is a story of God's faithfulness to a family that had a big need and how he worked a miracle for them.

Jerome and Lisa Lewis want to share Lisa’ breast cancer miracle story with as many people as they can. As Partners with Kenneth Copeland Ministries, they understand the miracle-working power of God and the importance of standing in faith for their well-being.

When Lisa received the report that she had breast cancer, the first thing this couple did was make sure fear did not overwhelm them.
They made the quality decision that they would only tell their friends and family about Lisa’s diagnosis once they were emotionally and spiritually ready to stand in faith on God’s Word. They knew that their loved ones’ reactions would, in part, depend on how the two of them communicated the news. A week passed. Finally, they told their children, their congregation and Lisa’s mother. Everyone came together in faith, not fear, to stand for Lisa’s breast cancer miracle.

Throughout Lisa’s treatment, they continued to stand in faith and against fear. They watched the words they spoke by choosing praise God and proclaim His Word. Their battle cry was one they regularly proclaim in their church: “Our faith is not fragile. Our faith is not weak. Our faith gets stronger every time we speak.”

Today, Lisa is cancer free and living her breast cancer miracle story. She and Jerome are so thankful for Jesus’ healing power, for the love and faith of their friends and family and for the gift of partnership they have with Kenneth Copeland Ministries. The lessons they learn about standing in faith and the prayer for healing they received from Kenneth Copeland Ministries’ Prayer Ministers helped them stand strong.

Kenneth Copeland (May 31, 2018) - The Receiving Formula for Your Miracle

Nick Vujicic - You Don't Believe In Miracle? Watch This Video! (May-15-2018). John 14:12: Verily, verily, I say unto you, He that believeth on me, the works that I do shall he do also; and greater works than these shall he do; because I go unto my Father.

Mac Hammond Ministries (May 3, 2018) - A miracle of healing and restoration in the Grotewald family.

Mac Hammond Ministries (May 3, 2018) - A miracle of healing and restoration in the Grotewald family. The deaf and dumb spirit will be delivered through prayer and fasting. Matt and Alana Grotewold share how their daughter Lilly was healed and her hearing returned. Lilly received her hearing with the prayer of her big sister.

Incredible Miracle Stories You Must Hear! - Jim Watt, Sid Roth.  In this It's Supernatural! Classic episode from 1999: Jim Watt has seen a baby's head, three times the size it should be, return to normal. And when he speaks, things are created.

Joseph Prince - Come As You Are And Receive Your Miracle 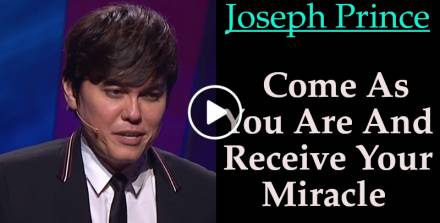 Joseph Prince - Come As You Are And Receive Your Miracle -  Will God hear us when we come to Him as we are with all our failings and disqualifications? Find certainty as you hear Joseph Prince reveal how God truly sees you through the cross, and why you can always approach Jesus just as you are for help. See from the story of Jesus healing the leper how God does not just have the power but also the heart to supply your area of need. Understand too how God cannot bless hypocrisy, why you can be totally transparent in His presence, and how you can pray bold prayers and receive your miracle!